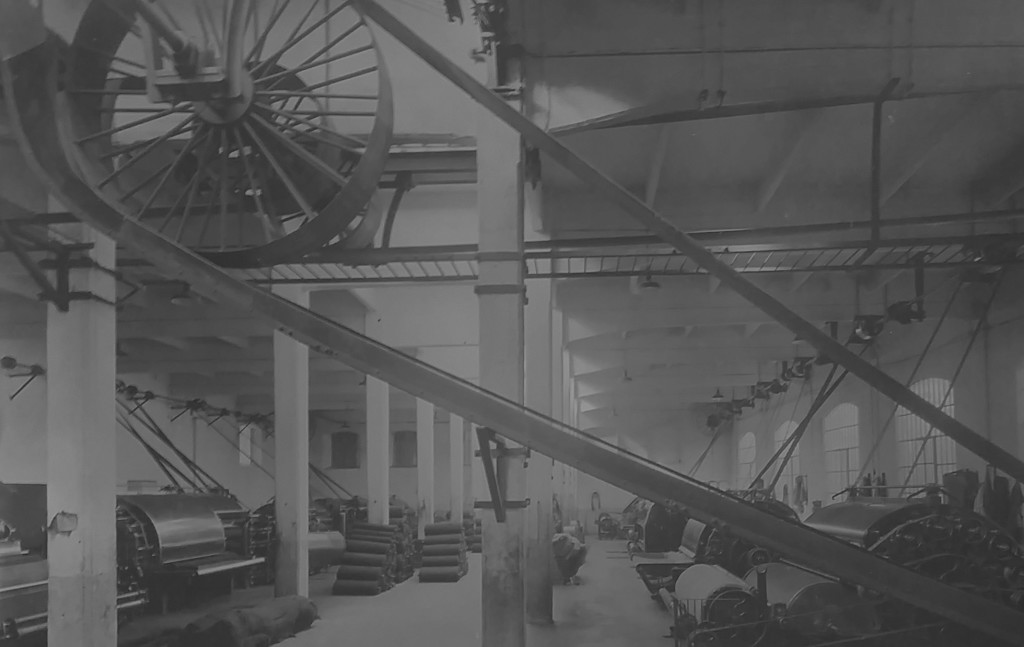 The beginning of the family business’ history is linked to an invoice addressed to Giustino Pecci dated 1884.
The character of Luigi Pecci, visionary as well as determined, is key to interpret the solid structuring phase that the company went through, in the context of the post-primordial textile industry history. Egocentric and reserved to the point of seeming grim at times, he completed all the steps that made of the woollen mill an organisational model for the industry. When the pioneers of what will have become the most important textile district of the world, were still working to develop products aimed to simple consumers and modest markets mainly within Italy, Luigi Pecci sent his first born son Enrico to Hamburg, at the time the most advanced of the German cities. In the large hanseatic city, holding one of the most important harbours of northern Europe, the young men developed a “global” vision of the business activity. A growth opportunity that revealed itself crucial for the evolution of the Lanificio Pecci in the following years.

FROM FATHER TO SON

Soon after then, Enrico Pecci worked with his father to learn all management aspects of the company, to then take his place in 1946, aged 25, when Luigi prematurely disappeared. Friendly and extroverted, Enrico had a more modern input and the production was soon exported. He was able to delegate and involve others, and believed in the community values of the company. For him, rivals were potential business partners, and he vastly contributed to the development of the area surrounding Prato. He looked at the world as a source of opportunities and expansion, and created mills in Peru and South Africa, in business partnerships with other entrepreneurs from Prato, aiming at intensifying the export to the most relevant markets worldwide. On one side rigorous and strict, on the other side sociable and keen to develop relationships, for many years he was the President of the Industrial Union of Prato, immediately after the crucial phase of the post-war. Enrico concluded large and important deals, overseas mainly, which were crucial for the recovery of the district and to re-build cities that were destroyed during the war.

Consequently, the company lived a period of great revenue, where the bases were created for a development that, in the following decades, unified in a positive circle the industrial development and the constant creative research. In the first years of the 1970’s, the Lanificio Pecci moved to the new location of Capalle and Enrico assigned his work to his first-born Luigi. It is when the innovations brought by Luigi started to show results, that the family and company witnessed his loss. The entire community held together to overcome the great tragedy. At the same time, the company’s values and confidence became stronger and once again produced determination and accomplishments. Firstly, Alberto, the second-born, became the leader of the company. Secondly, the company donated a contemporary arts centre to the city of Prato named Centro per l’Arte Contemporanea Luigi Pecci.

With Alberto Pecci, the company evolved in the direction of an integrated group of diversified businesses. It was a period of important acquisitions – those of the textile companies of Pontoglio and Privernum – and of the diversifications of the tailoring, the jersey textiles and the yarns. In the 1980’s, supported by this vast background of activities and interests, Alberto Pecci acquired a leading role in the field of national finance and enterprises, with responsibilities and prestigious tasks. As his predecessors, Alberto proved to be able to adapt to different environments, without holding back nor letting old models stop him. In an age of structural transformations in the textile world, the company’s management set up he created responded with great success to the needs of the time. His open attitude allowed important strategic changes, crucial to the continuity of the development of the company when globalisation put the Italian textile industry in discussion. To the crisis of the vertical and integrated production model, the company responded re-designing the woollen mill into independent and complementary unities, directed by managers who valued the structural assets and the experience of the woollen mill in a mindful way, conveying the production principles into the new, different scenarios. With this vision, the Manifattura Pecci 1884 was born.

The discontinuity of the experience of the Lanificio Pecci succeeded in its intent, creating a decisive shift and generating a new concept.
With Manifattura Pecci 1884 a revolutionary setup was created, able to combine the dynamism of a new company with the solidity and experience of a historical business.
The vision of Manifattura Pecci 1884 can be summarised as the valorisation of originality, the profound knowledge and know-how deeply integrated in the textile industry of Prato, the enhancement of the historical culture and of the ethics of the work adapted to the constantly changing settings of the fashion world and contemporary life styles. It is necessary to look at the industry with fresh eyes and with a perspective that, from the past, projects itself towards the future.

The new challenge is to create and develop dialogues with foreign markets and cultures. To be able to create business partnerships with established companies as well as emerging ones, worldwide. Spreading the values and the quality of excellence of craftsmanship, both as a concept of “personalisation of the industrialisation” which is the real added value of the Made in Italy, and the respect for the ethical standards of the work, not only environmentally friendly but also social and human, without which the concept of quality remains a generic and impersonal concept. The quality is not only valuable to the company and the interest of a few, but also to a wider audience.
Manifattura Pecci 1884 believes in the importance of the relations between its partners and clients, as well as the community and the district.
✕